What Are At-the-Market Offerings?

ATMs are sales agreements between public companies and broker-dealers that allow the latter to sell shares of the company on the open market over a set period or in an open-ended manner.

Most ATMs involve common shares, but companies can sell preferred stock and debt instruments as well. ATMs allow companies to raise capital by selling equity on the open market.

Why Do Companies Participate in ATMs?

ATMs can be opportunistic. Companies may opportunistically time the execution of ATM programs, increasing sales amid stock rallies and pulling back when rallies fade or reverse.

ATMs can help companies quickly, quietly, and cheaply raise capital. ATMs are often overlooked by Wall Street, generating less attention compared to other stock offering methods. Underwriting fees are also less expensive for ATMs at about 2% – 3% compared to secondary offerings that include underwriting discounts of 5% or more. ATM sales can be quick or methodical, and companies may choose not to execute on any authorizations. 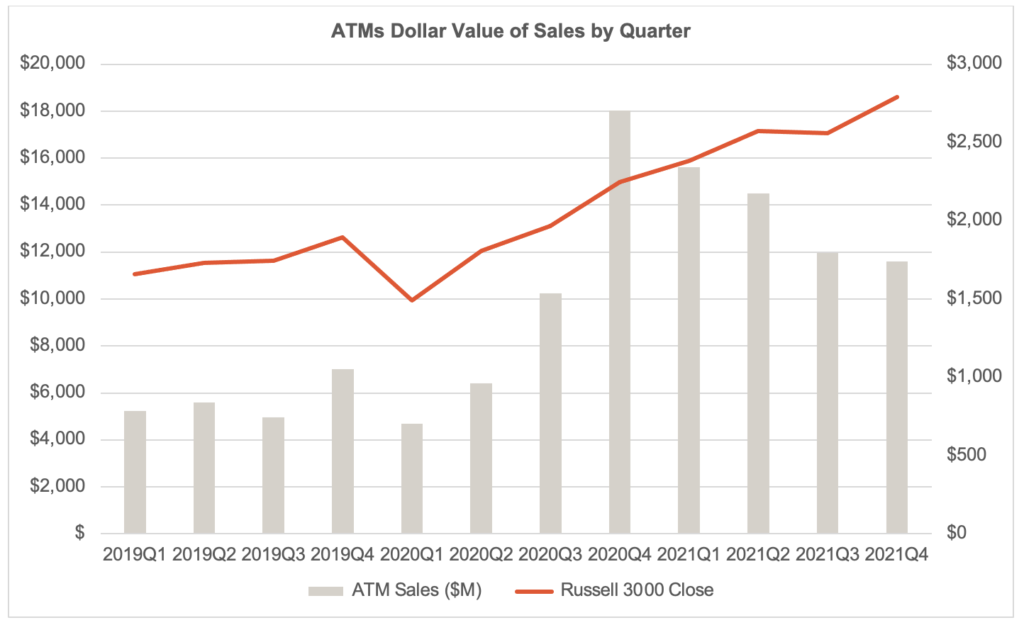 About the ATM Data

VerityData captures ATM activity disclosed within 10-Ks, 10-Qs, as well as updates provided in 8-Ks and prospectus filings. Calendar Q4’21 ATM data may not reflect all activity due to fiscal calendars used by some corporations. Situations where ATM sales aren’t granular and cover two or more quarters are recorded in the more recent quarter (ex. ATM sales from “December 2021 to January 2022” are accounted for in Q1’22).