Taken together, sellers and buyers were matched almost 1:1, which is solidly below the average ratio of monthly sellers to buyers. 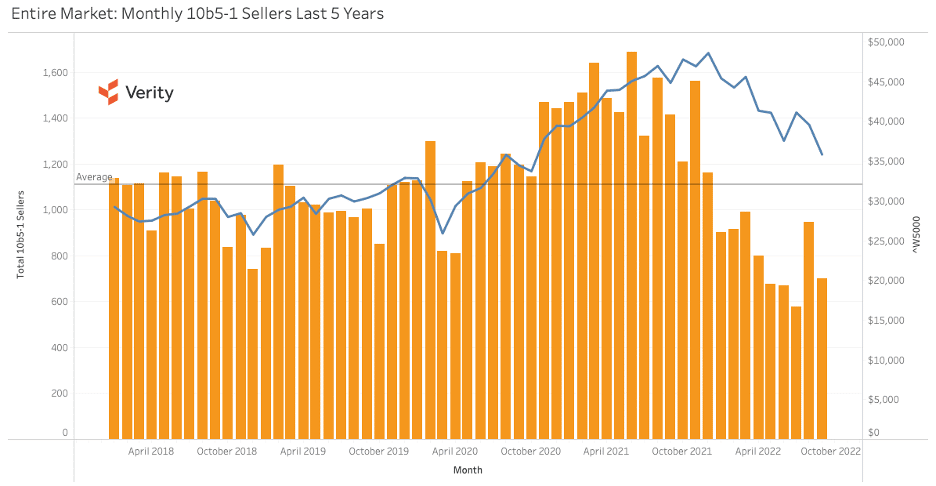 The number of 10b5-1 sellers over the past five years. Source: VerityData

+ Charter Communications (CHTR) – Director Eric Zinterhofer showed strong conviction with his purchase of $10.2M at $374.04 to kick off November. He’s been on the board since 2010 without ever buying before so the decision to buy after this year’s slide is a meaningful deviation in behavior. Zinterhofer is co-founder of private equity firmer Searchlight Capital. (11/4/22)

+ Veris Residential (VRE) – CEO Mahbod Nia bought shares for the first time at VRE since taking the helm in March 2021. Nia added to his equity exposure that included options that were underwater, which was already an incentive to guide the stock higher. The October 11 buy of nearly $1M at $11.51 quickly proved timely as Kushner Companies sent an unsolicited bid on October 21 to acquire VRE for $16.00 per share. (10/13/22)

+ Tent Healthcare (THC) – CFO Daniel Cancelmi became the first buyer at THC in over two years by spending $473.8K on shares at $43.07. Cancelmi’s only other buy was in March 2020 and proved timely as he sold a year later for a ~250% gain. The latest buy was also meaningful as he put cash behind his statement when discussing the newly approved $1B buyback plan in which Cancelmi talked about “the belief in the upside in [THC] equity value.” (10/28/22)