Insiders at AXP, ADBE, BRK.A Make Moves As Others Wait for Clarity

Sentiment throughout Q3’22 was modestly positive, thanks to a lack of insider selling. As trading windows began to close, insiders generally didn’t take the last opportunity to sell in September before blackout trading restrictions went into effect ahead of earnings. However, buying was limited in Q3’22 and decreased in September compared to August even as stocks pulled back. Overall participation by insiders remains low, suggesting a lack of conviction with many insiders holding off on buying or selling as they look for more clarity in the economic outlook.

The fact so few insiders sold was encouraging but it came with below-average buying. Roughly 1,500 insiders bought shares of their company in Q3’22 and the historic average is ~1,900. Q3’22 buying totals were a downgrade from the prior quarter, when the number of insiders buying was solidly above the average.

Taken together, sellers outnumbered buyers 2.1 to 1 during the quarter, which is below the quarterly average of 2.8.

Beyond Numbers: What Does Insider Behavior Say About the Market?

Insiders are lacking confidence in the economic outlook, exhibited by an unwillingness to buy in the current bear market. Note that insiders have historically been contrarians and have been substantial buyers in past bear markets. Conversely, depressed selling levels indicate insiders are unwilling to part with their shares at current prices, likely based on the belief stocks aren’t being fairly valued and higher prices are ahead.

The charts below show quarterly totals of unique buyers and unique sellers for the past six years. 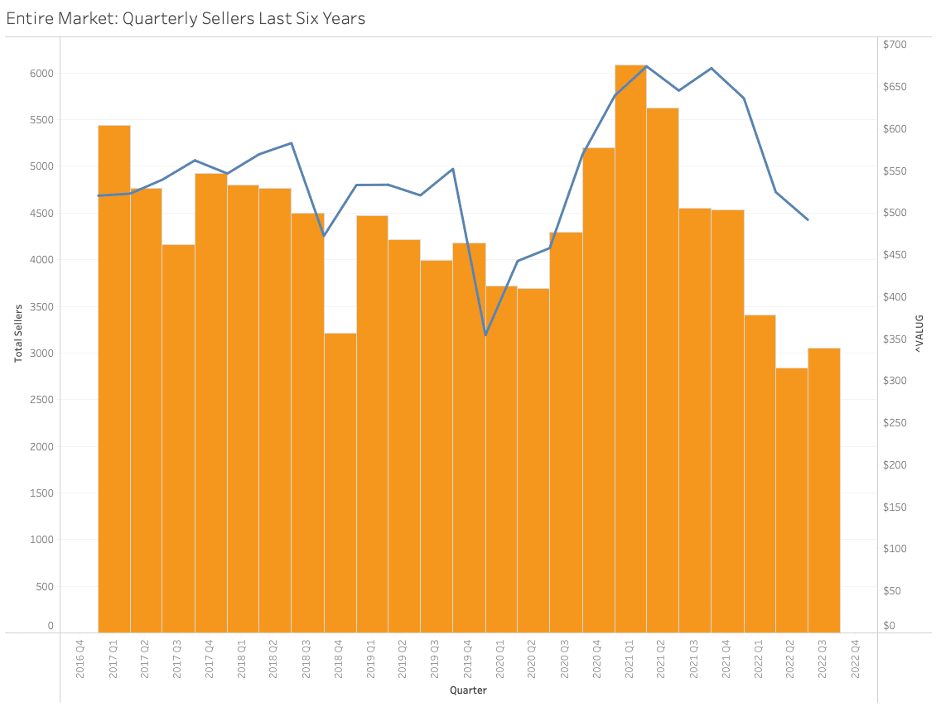 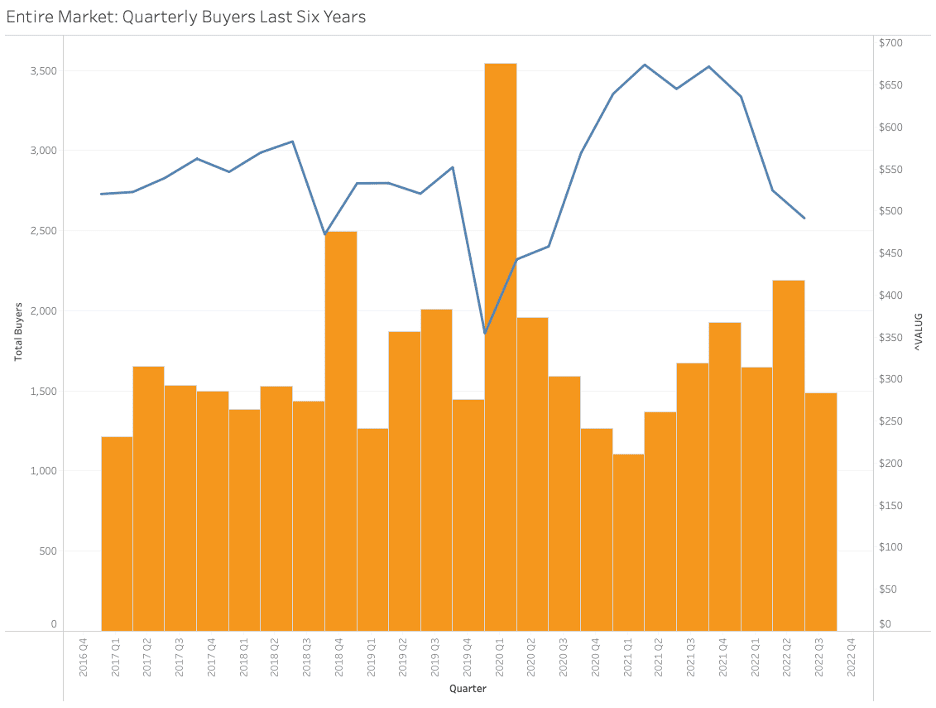 In an environment like this, we are looking at company-specific stories where insiders are behaving unusually. Throughout the quarter, we have been alerting clients with real-time coverage of unusual insider behavior. Here is a small selection of that coverage from recent weeks.

+ Berkshire Hathaway (BRK.A) – CEO of Berkshire Hathaway Energy (“BHE”) and Vice Chairman – Non-Insurance Operations Greg Abel, who is in line to succeed Warrant Buffet at the helm, bought $68.3M in Class A Shares at $406,729.53 per share. The buy was transacted near an 18-month low and likely as the company’s quarterly insider trading window was closing, sending a strong undervalued message. (10/3/22)

+ Adobe Systems (ADBE) – CFO Daniel Durn stepped up for a rare buy, representing just the second by an executive since 2004. Durn has been CFO of three other publicly traded technology companies but never bought at any so his change in behavior to scoop up $936K in ADBE stock is significant. The buy followed a poorly received merger announcement, so there was a PR element to the buy, which was outweighed by the deviation in behavior by Durn and additional buying by Director David Ricks. (9/26/22)

+ American Express (AXP) — Insider selling ceased at the financial services giant, an unusual change in company-wide behavior that generated our Extreme Cessation of Selling Unusual Event and sends a compelling positive valuation message. Insiders have been consistent sellers at AXP for more than a decade, so it stands out that none have sold since early June. It was the first calendar quarter without selling since Q2’20 and before that, it was also two years since the prior cessation. We note that buying is also uncommon at AXP, so any positive sentiment message is generally done through pauses in selling. (9/28/22)