What Are Lazy Prices? On ZG’s Loss & the Role of Language in Stock Valuations

A research analyst explores the term "lazy prices" in the context of Zillow Group's 2021 stock drop.

When should a stock be bought or sold?

It seems like a never-ending endeavor as analysts often find themselves knee-deep in calculations and conversations as to what stock is over or undervalued. In too many cases, they follow the numbers while the narrative gets pushed aside.

In this article, we’ll show what that means, explain why it matters, and share a very public example of lazy prices in action.

What Are Lazy Prices?

The term “lazy prices” was coined by Lauren Cohen, Chris Malloy, and Quoc Nguyen in their seminal work, Lazy Prices.

In it, they explore the connection between changes in the language within a company’s financial statements and the implications in the future performance of the company’s stock. Changes within the language of financial documents, even subtle ones, can impart valuable information. They found the most impactful textual signifiers were:

Going Beyond Lazy Prices: An Example

To understand the limitations of lazy prices and the importance of getting a complete picture, look at Zillow Group (ZG). Zillow, along with Trulia, which it acquired in 2015, were the first to offer an online real estate marketplace. In 2018, Zillow began to directly buy houses and quickly resell them on the open market to take advantage of the surging real estate market.

In February, ZG hit an all-time high at $212.40. That month the company also released its 10-K, which included seven new risk factors not shown in the prior year’s annual report. All seven risk factors referenced Zillow Offers, ZG’s program for buying homes directly from owners, then reselling them in the open market.

There were also significant changes to the language of repeated risk factors, those listed across earlier statements (see below). Nearly all of them were tied to Zillow Offers, with mentions of competitor efforts to offer a similar service and Zillow’s difficulty to “evaluate potential future performance of Zillow Offers without the benefit of established long-term track records,” either through itself or by competitors. 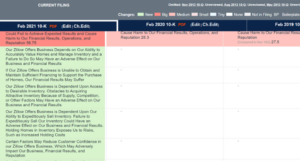 In August, ZG noted plans for a robust hiring spree to increase its workforce by 40% in 2021, the bulk for its Zillow Offers unit. Management also touted that “the business model has proven quite durable” and the housing market was supported by the “great reshuffling” as COVID drove more to relocate from cities and employers. Those rosy views did not fully pan out.

On October 18, it was reported that ZG would no longer acquire homes through Zillow Offers as the firm looked to work down its backlog. ZG lost about 10% in value that day, though the stock soon recovered. On November 3, ZG announced a surprise loss, driven by Zillow Offers which the firm announced would be shut down.

Moreover, ZG would cut a quarter of its workforce, mainly from Zillow Offers. A week later, it was publicized that Zillow was looking to unload roughly 9,800 homes it already owns — plus another 8,200 it was in the process of buying, with Zillow expected to lose between 5% to 7% (WSJ). As a result, valuation took another hit as the stock traded eventually traded below $60 for the first time in nearly 16-months.

The Zillow example falls in line with the conclusions made by the inventors of the term “lazy prices” who pointed out that investors mustn’t fail to “recognize and incorporate important signals.” Hence, a six-to-12-month lag in “price adjustment” after “meaningful” textual or language changes in financial reporting.

Clearly, the stock’s performance isn’t solely tied to the above disclosures, but it’s clear that a reliance on Zillow Offers was overly optimistic which played a part in ZG’s slide. An investor could have used those ZG disclosures as a signal to temper their own outlook for ZG.