In many ways, 2021 set a new high-water mark for corporate buybacks.

Buyback volume for U.S. companies in Q4’21 was $289.8B, a 10.3% sequential increase and a 110.5% year-over-year jump. Buyback volume contracted significantly in 2020 as many companies conserved cash during the pandemic. Volume recovered to pre-pandemic levels in Q2’21, set an all-time high in Q3’21 and continued to surge higher in Q4’21. For the year, buyback volume totaled $936B, a new record.

The aggregate buyback value at S&P 500 companies increased 8.8% sequentially and soared 109.1% year-over-year to a new record high of $244.1B. Those buybacks accounted for 84% of all buybacks, lower than the average of 89%. 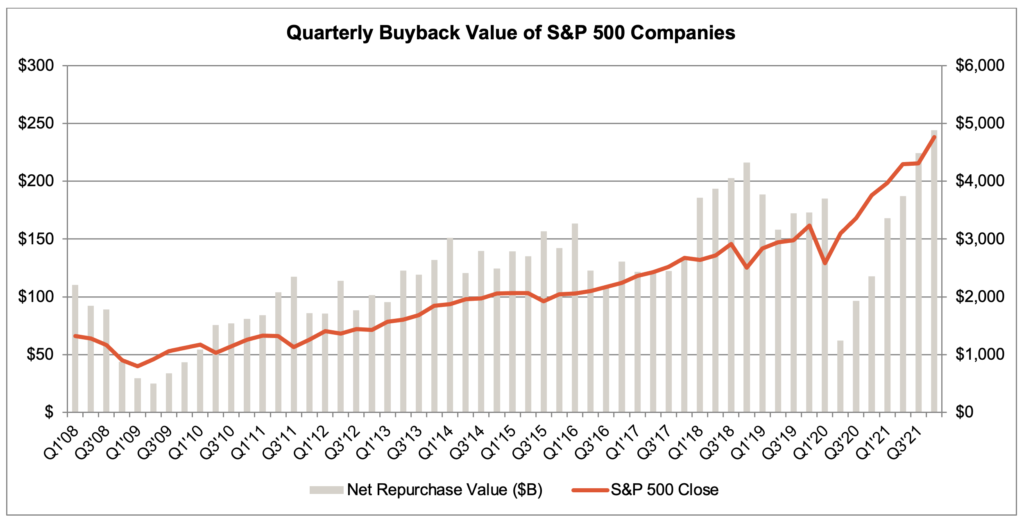 S&P 500 companies accelerated buyback volume in 2018 immediately after the Tax Cut & Jobs Act went into effect. Volume moderated in 2019 to about $187B per quarter then dropped significantly in 2020 during the COVID-19 pandemic. Q3’21 set a record by surpassing the Q4’18 prior peak and the volume increased further in Q4’21.

Russell 2000 buybacks rose 17% from a quarter earlier to a record $16.6B. Note that small-cap companies as group have been more opportunistic with repurchases than large-cap counterparts. 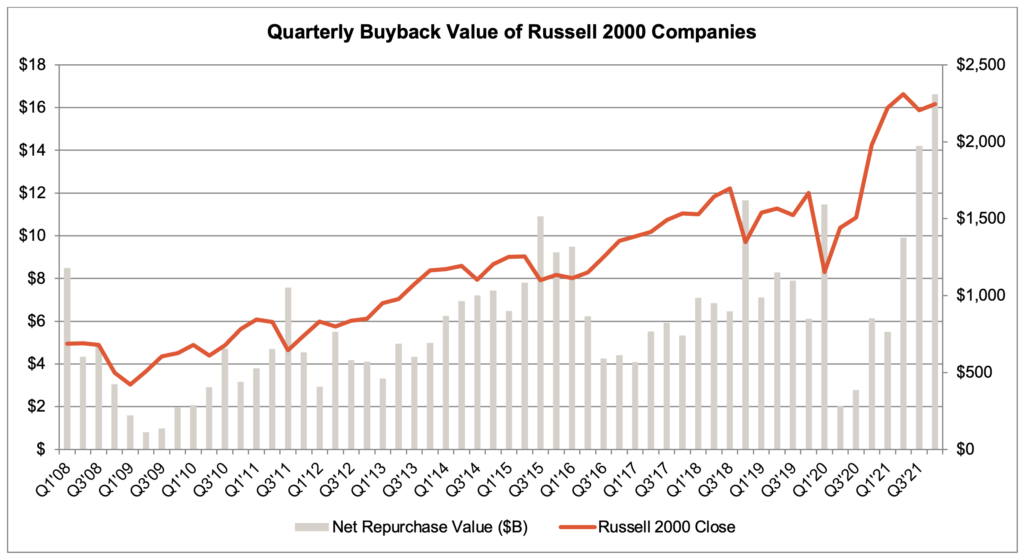 As Percent of Market Cap, S&P 500 Buybacks Remain Below Average

3% Increase in Number of Companies That Repurchased Stock

Here is what we might expect in 2022 based on data from ASRs and buyback authorizations.

The 36 ASRs by companies so far in Q1’22 is good for $39.8B, as of March 14. The number of companies using ASRs is the highest since Q4’18 and the dollar value is the highest ever Q1’19. Most companies disclose ASRs upon entering into the deal, but some, such as Apple (AAPL), report the ASR after the fact so the Q1’22 volume will continue to grow. This quarter’s largest ASR is by S&P Global (SPGI) who had pent up cash after a merger stalled buybacks.

Recent Activity Signals Yet Another Record

Throughout 2021, Russell 3000 companies spent $936B on buybacks, which is 5% higher than the previous peak $890B in 2018. The two years after 2018 were progressively smaller. The volume of buyback plan authorizations in recent months and ASRs of late indicates companies could be equally or more aggressive in 2022, and especially in Q1’22.