Macro: Most Insiders Had to Watch From Sidelines During Volatile January

The volatility that gripped the market in January provided opportunities for many investors. But for insiders it was all about risk.

Trading windows for insiders were closed at most companies as earnings announcements were being readied. Most insiders could not buy or sell stock unless they already had 10b5-1 plans in place. So instead of being able to take advantage of a potential buying opportunity, insiders largely had to sit on the sidelines and watch as the value of their holdings declined.

There were some exceptions.

Fewest Insider Transactions in Past 5 Years

How did this January compare to others?

The chart below shows the number of unique buy and sale transactions per month since 2017. January is highlighted in orange. The two least active months for transactions were Januarys, with this year’s being the lowest volume month in the past five years. Generally, the first month of each quarter has the lowest transactional volume due to trading windows. 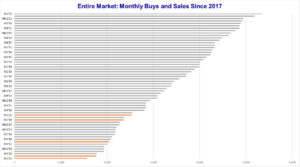 The month of January (highlighted in orange) typically has fewer insider transactions. January 2022 was the least active in the past 5 years. Source: VerityData

Macro: Short-Swing Rule Will Keep Some Insiders From Buying

One common question we get during market volatility is, “The stock has been slammed! Why aren’t insiders buying!?” Above, we noted that trading windows limited buying in January. Following earnings, another thing will limit buying is the Short-Swing Rule, a regulation that prohibits insiders from transacting profitable “trades” within a six-month period.

The chart below shows insider activity at Teladoc Health (TDOC) since the beginning of Q3 2021. That activity included CEO Janson Gorevic selling 10,000 shares at ~$150.00 in early November. The stock is now trading at ~$75.00. If the CEO were to buy 10,000 shares, he’d have to disgorge profits from the trade back to the company, which in this case would be the delta between his sale proceeds and buy investment, and that would effectively increase his cost basis on the purchase back to ~$150.00, or nearly 2X the stock’s market price.

If you’re wondering why an insider or group of insiders aren’t buying on the recent weakness and following earnings, check to see if they sold in the past six months.

Insider activity at Teladoc Health (TDOC) since the beginning of Q3 2021. Source: VerityData

February 14 is the 45th day of the quarter, which is the deadline for most major institutional investors to file quarterly 13F filings disclosing long and some derivative positions as of the end of the prior quarter (December 31, 2021, in this case). We’ll be using our SuperFund tool in VerityData InsiderScore to look at thematic investors (healthcare-focused, TMT-focused, value-oriented, etc.) and find consensus among their inflow targets.

Insider transaction volume will likely be very high in February due to several factors, including:

The latter is an annual driver of sales volume as many companies dole out restricted stock awards in Q1 each year with that stock vesting over the course of subsequent years on the anniversary of the award date. Many insiders peg selling to these vesting events and the critical mass of such events in Q1 often shoots up sales volume.

In a down or volatile market, some insiders may change behavior and hold off on selling at a time they normally would. That’s a good thing and we can help investors identify those situations.