A choppy market in the middle of December gave insiders a last chance to buy in 2021 before quarterly trading windows closed. They took advantage of it — the number of buyers for the week ended December 21 was the second highest for the year.

There were plenty of insiders looking to generate liquidity and/or do some financial planning as the book closed on the year. While breadth and volume weren’t unusual for the time of the year, as the chart below shows, the dollar value of insider sales hit a new all-time high in 2021. December activity certainly played a role in that.

Insiders we termed “super sellers” such as Elon Musk at Tesla (TSLA), Satya Nadella at Microsoft (MSFT), and the Walton Family at Walmart (WMT) played an outsized role in pushing the dollar value of sales to a new high.

For more information, see the The Wall Street Journal’s examination of our data and analysis. 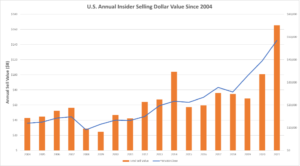 Worth Noting: Cessation of Selling Events

One datapoint we track closely at Verity are Cessation of Selling events. These proprietary events identify companies with robust insider selling cultures where insider selling has ceased, sending a positive valuation message in the process.

This company-wide change in insider behavior is often valuation-oriented (insiders believe the stock is undervalued and will wait for a higher price to return to their normal liquidity-generating behavior). But it can also be an indication of an imminent material event.

Management changes can be another essential datapoint for both idea generation and risk management. In December 2021, seven companies announced CEO changes that involved the naming of an Interim CEO while another ten companies announced CFO changes that involved an interim replacement. The average performance of the 17 stocks in the six-month period ahead of those CEO and CFO changes was -35.6%.

Insider activity is typically muted during the first half of January, picking up as earnings season kicks into gear with the big banks.

Because a large majority of companies report earnings in February or March, most insiders don’t have the opportunity to buy in the event of a January market swoon. This was most evident in 2016, when plunging oil prices and weak economic data out of China led to the NASDAQ’s worst month in six years. The only group of insiders who could take advantage of that market volatility ended up being bank insiders. They bought at prices that now represent six-year lows.