The second month of the quarter is typically the heaviest in terms of insider trading volume, but insider activity in November remained fairly muted (continuing a theme we’ve observed throughout 2022). 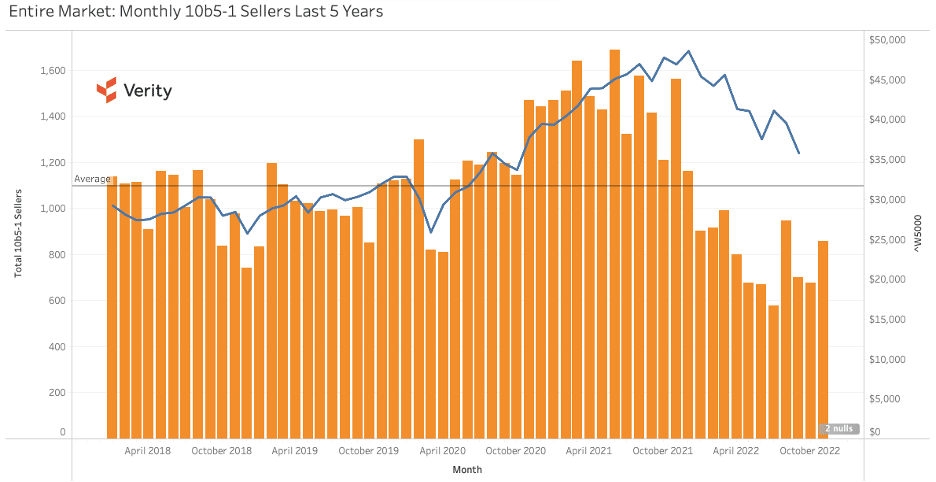 The number of 10b5-1 sellers over the past five years. Source: VerityData

+ IAC (IAC) – Director Michael Eisner, who was previously CEO of Disney (DIS) for nearly 22 years, returned as a buyer at $47.13, sending a strong undervalued message at the internet media company. Eisner has deep pedigree in the entertainment industry through his years at DIS and ABC before that. Listed as a billionaire according to Forbes, Eisner has deep pockets for seven-figure buys. However, he’s rarely bought in the past and his limited track record proved timely before, including another $5.0M buy in August 2020. (11/28/22)

+ Caesars Entertainment (CZR) – A director with a history of primarily timely purchases at the casino and resort operator spent $1.1M to buy at $44.74. Director Michael Pegram has been opportunistic in the past as he bought amid price troughs in 2016, 2018, and 2019. Outside of his March 2022 purchases, Pegram has shown a penchant for opportunistic buying and his return with the stock trading at ~2-year lows was notable, especially as he transacted his largest buy by dollar figure to date at CZR and its predecessor firm. (11/8/22) Get Full Story >>

+ Varonis Systems (VRNS) – Purchases at ~$16.70 by three top executives and a director at the cybersecurity firm represented a compelling display of conviction and positive insider sentiment. James O’Boyle, SVP of Worldwide Sales,  set the pace with a $1.0M buy at $16.72, while CEO Yakov Faitelson and CFO Guy Melamed were  also buyers. The trio of executives reversed sentiment after each was a seller in 2021. (11/8/22)