2022 gave us a new record low for insider selling; marked the first major drawdown in the 21st century where insiders sat out rather than bought the dip. December saw unusual activity from insiders at TSLA, NRG, and HZNP.

Insiders hedged in 2022, showing an unwillingness to call a market bottom by buying en masse (as we’ve seen during other turbulent market periods) while also deviating from their long-displayed behavior of regularly turning stock-based compensation into cash. This behavior suggests a cautious near-term outlook (stocks have more room to move down so wait for a better price) and rosier long-term outlook (sit on stock-based comp until stock prices rebound).

During other substantial market drawdowns since 2004, insiders have stepped into the void and bought aggressively. In doing so, they perfectly nailed the false bottom of November 2008 and the market bottoms of 2009 (Great Financial Crisis), 2011 (U.S. credit downgrade), 2016 (banking woes), and 2020 (Covid-19 Pandemic).

What Does It Mean for Investors? 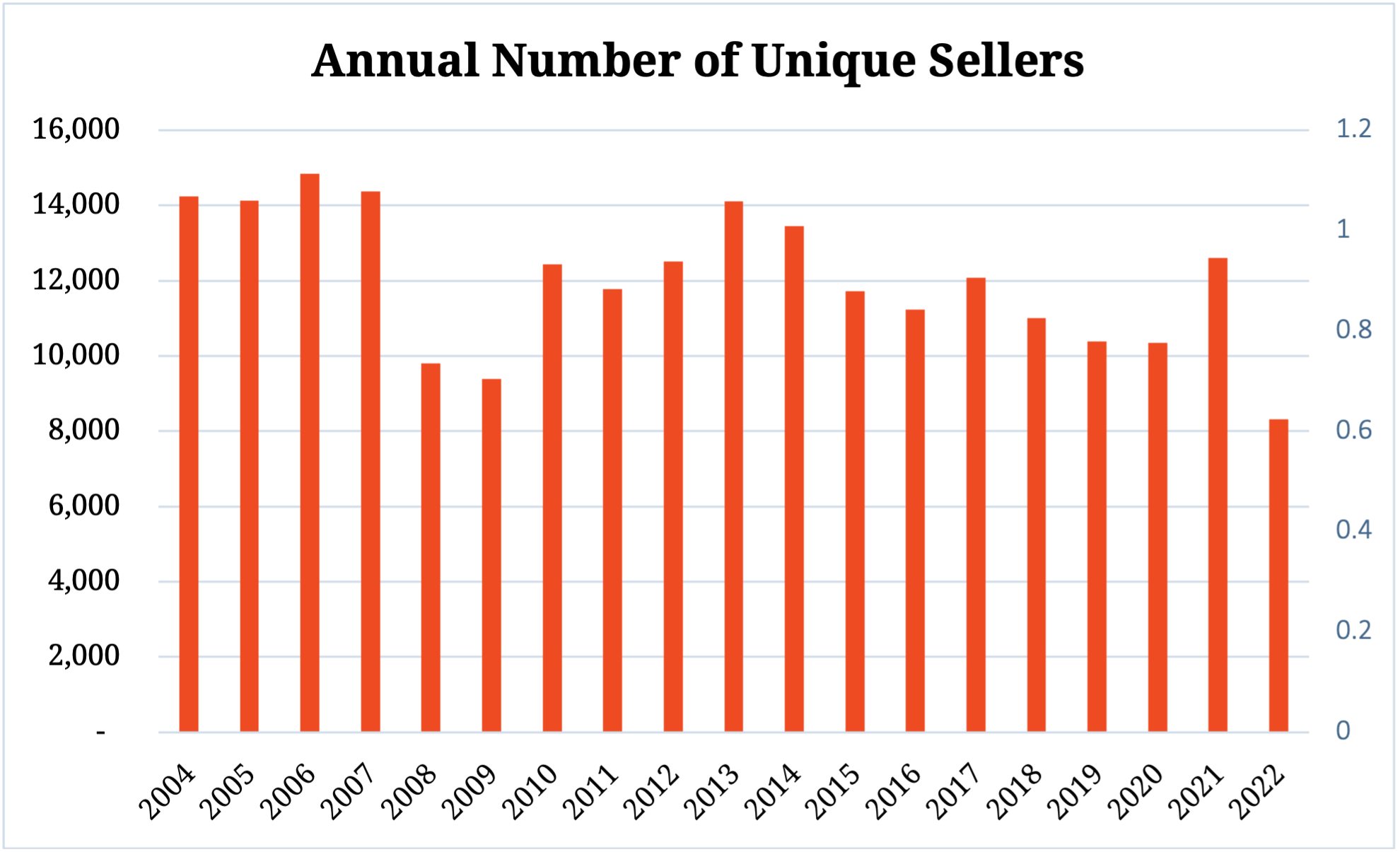 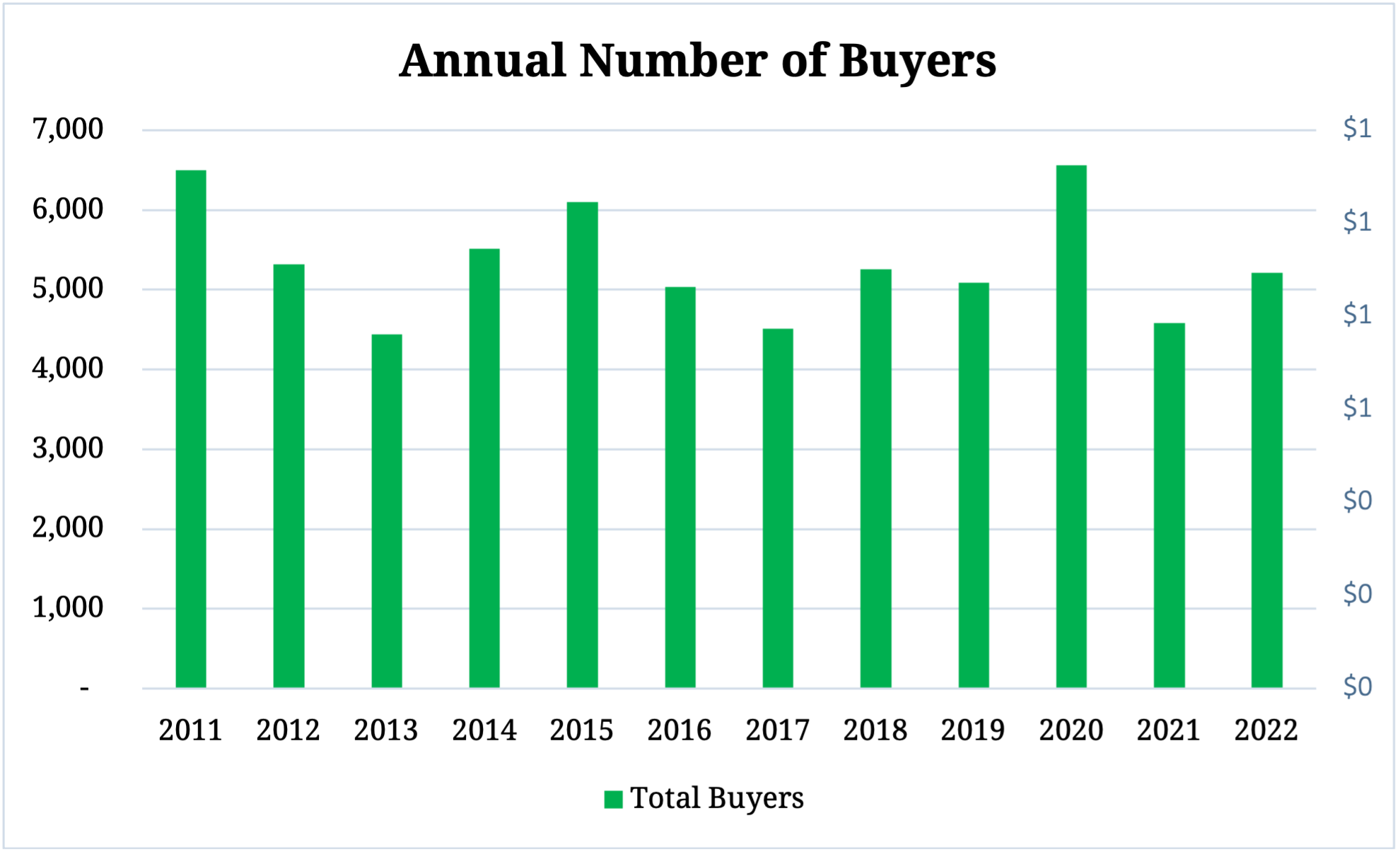 Despite annual unique sellers being unusually low in 2022, the dollar value of shares sold was close to the amounts seen before 2020. However, the dollar value is prone to skew by outliers, which was especially noticeable in 2022 when Elon Musk accounted for nearly a third of the selling total by value.

Looking past that, the number of unique buy and sale transactions aligns with the flow of unique buyers and sellers. Lastly, we note that 10b5-1 selling participation remained elevated at 58% in 2022. The percent of sales executed by 10b5-1 plans has steadily climbed since 2004, when just ~30% of sales were executed via 10b5-1 plans. 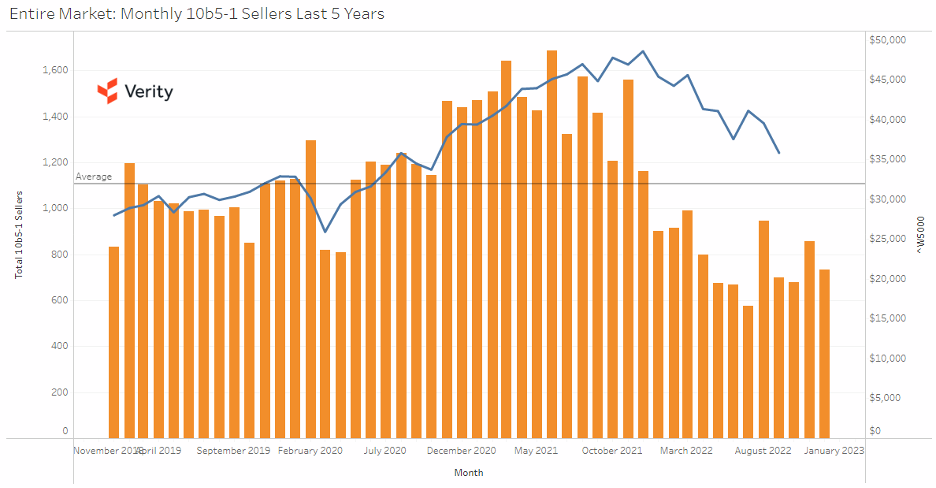 The number of 10b5-1 sellers by month over the last five years. Source: VerityData

Horizon Therapeutics (HZNP) – Our Cessation of Selling event generated at HZNP on November 18 and we issued research on the unusual lack of insider selling at HZNP on November 21. On November 29, it was announced that three large pharmaceutical firms were interested in buying HZNP. On December 12, it was announced that Amgen (AMGN) will buy HZNP for $116.50 per share. The sequence of events was a reminder that sometimes an unusual lack of insider selling can precede material corporate events, including M&A. (11/21/22)

Tesla (TSLA) — Following sales of nearly $4.0B in shares at ~$208.60 in early November, CEO Elon Musk disclosed in mid-December that he’d sold another $3.6B in shares of the electric vehicle maker at $162.81. Our last two Research Briefs covering Musk’s sales have included this bit of commentary: “Musk has portrayed his sales over the past year as being for fairly benign purposes (taxes, paying for Twitter, etc.) not associated with TSLA’s stock price, the company’s performance, or the company’s prospects. But … Musk’s sales have been well-timed (and his buying in earlier periods was as well), so regardless of his reasoning for selling TSLA shares right now, it’s hard to ignore the expert timing of his previous sales.” (12/15/22)

NRG Energy (NRG) — The CEO, chairman, and four others from the board bought a combined $1.5M in shares at an average of $31.75. The six buyers were the most in a single quarter at the firm since Q4’15. The unusual buying happened amid the stock’s recent pullback, the market’s response to a proposed acquisition of Vivint Smart Home (VVNT). Purchases by CEO Mauricio Gutierrez, Chairman Lawrence Coben, and others suggest they believe the selloff was an overreaction (12/19/22).

Since January 1, 2004, all insider transactions at companies governed by the S.E.C.’s Section 16 regulation that requires disclosure of buys, sales and other transactions via Form 4s. Excludes 10% Owners (e.g. institutional investors and other non-management insider filers). An insider who buys/sells during the course of the year is only counted once for unique buyers/sellers counts.