When Change Is Bad: How to Get Long & Short Ideas With the Jaccard Index

The Lazy Prices academic study presented the diverging stock returns of companies with significant changes and those with minimal changes in 10-Ks and 10-Qs.

Specifically, the authors of the study – Lauren Cohen, Chris Malloy and Quoc Nguyen – found that a portfolio that:

In this article, I’ll cover how simple it is to take advantage of this method to find long and short investment ideas in VerityData | inFilings.

The method of the Lazy Prices study was to bucket companies based on the amount of textual change using linguistic and natural-language processing measures such as cosine similarity and Jaccard similarity, along with two other measures.

The Jaccard similarity coefficient, for instance, measures the amount of similarity between two data sets with a higher number (up to one) indicating more similarity.

In the screenshot below, you’ll find Russell 1000 companies sorted to show those with the lowest Jaccard numbers, i.e., the most changes to the risk factor section of a 10-K. According to the Lazy Prices study, these companies underperformed.

(We could also sort by highest Jaccard number to find companies that may be suitable for the long bucket of the portfolio, according to the study.) 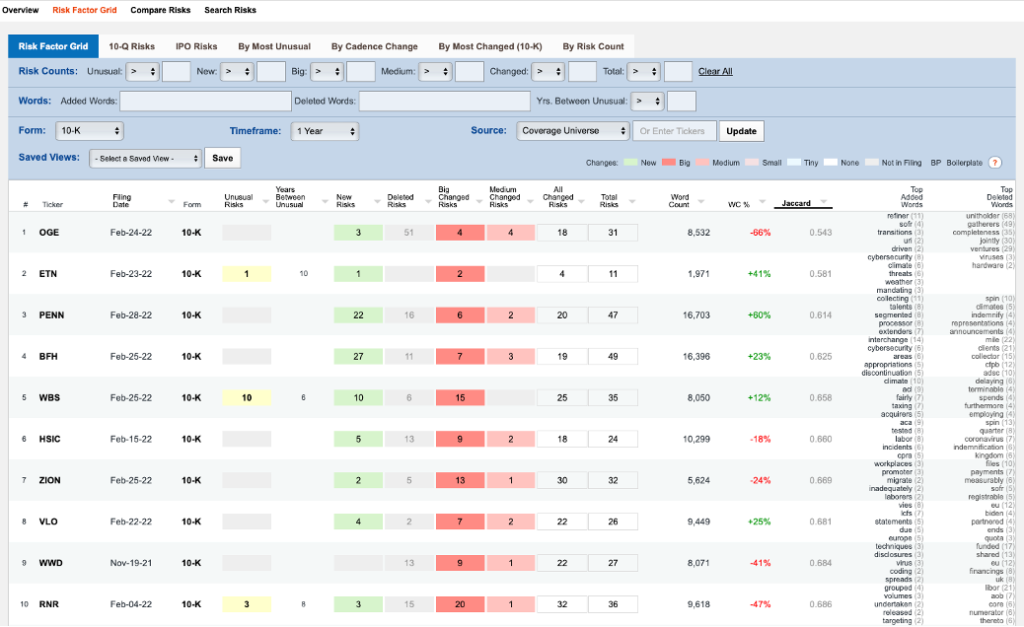 Going short: Companies sorted by lowest Jaccard measure showing those with most changes to risk factors 10-Ks and 10-Qs in VerityData | inFilings.

The long/short portfolio within the Lazy Prices study was purely quantitative based on text changes and didn’t involve reading the filings. We also view filing changes as a good jumping off point for idea generation. Let’s dive into what those changes can look like.

Penn National Gaming (PENN) was among the companies with some of the most significant changes, producing a Jaccard number of 0.614 Their latest 10-K published on February 28 totaled 47 risk factors, up from 39 compared to the prior 10-K. 21 Risk factors were new while 14 were deleted. Another seven risk factors had big changes.

New risk factors and big changes covered topics such as “intense competition” in the gaming space in which PENN expects “to continue to intensify.” PENN also clarified potential negative events and media coverage by citing its investment and partnership with Barstool Sports.

Heatmap showing when risk factor changes were made and where as well as the extent of those changes. Source: VerityData

Next time you’re looking for potential investment ideas, try starting with the framework developed by the authors of the Lazy Prices study. If you’re a VerityData | inFilings customer, you have access to Jaccard measures as well as the other measures used — for every section of a 10-K and 10-Q.

VerityData | inFilings accelerates analysis by making it easy to search, discover, and monitor changes across a wide range of company disclosures. Data feeds are also available for quant funds.