Macro: (Most) Insiders Watch from Sidelines During Volatile February

Maybe insiders didn’t mind sitting January out because many of them chose to sit February out also.

Last month we explained that the volatile market in January didn’t provide much in the way of opportunity for insiders, who stared longingly out closed quarterly trading windows, unable to take advantage of the market’s pullback as they awaited their companies’ earnings announcements. That lack of opportunity turned out to be a near-term blessing as the market continued to sell-off in February. Insiders responded to that volatility by watching from the sidelines.

A lack of selling is positive because sell biases are inherent at many companies due to stock-based compensation policies.

As discussed in our monthly review published in January, when insiders change their selling behavior by moving to the sidelines it means they’re unwilling to sell at current valuations, which they perceive to be out-of-alignment with their view of where their company’s stock should be trading. A dramatic shift in selling behavior like this at a company may generate a Cessation of Selling or Extreme Cessation event, or what we like to call a “buy-less buy message”.

The chart below shows the number of unique insiders who transacted at least one sale via a 10b5-1 plan. It’s a monthly view stretching back to January 2016 that shows rising volume throughout the period except when the market pulls back. During pullbacks, 10b5-1 selling slows because stocks aren’t hitting new highs (less trigger-priced selling) and they are falling below minimum sale price thresholds. 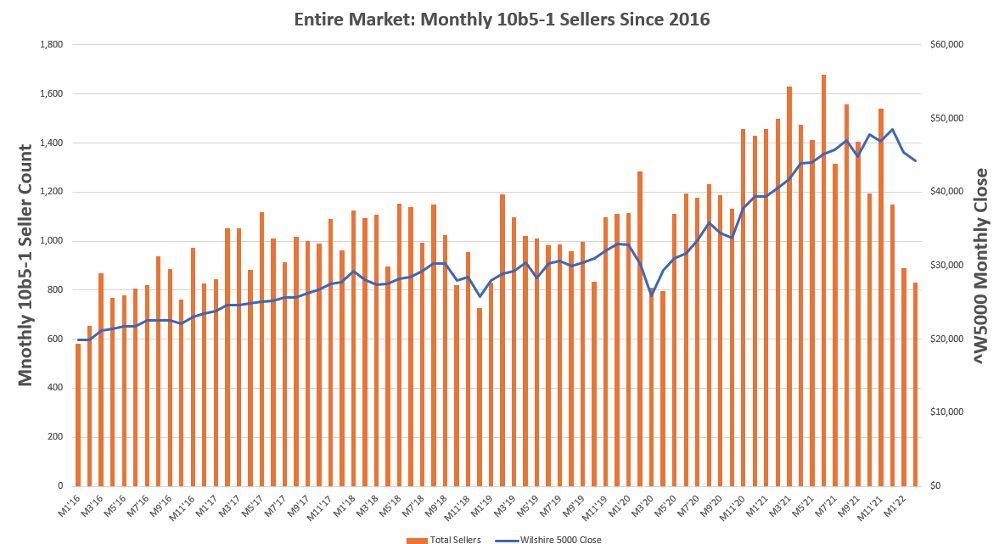 During pullbacks, 10b5-1 selling slows: A monthly view starting at January 2016 shows rising volume throughout the period except when the market pulls back. Source: VerityData

10b5-1 In Focus: Kimbal Musk’s Selling Behavior Scrutinized by SEC

The Wall Street Journal reported on February 24 that the Securities and Exchange Commission is investigating stock sales by Tesla (TSLA) Founder and CEO Elon Musk and his brother, Director Kimbal Musk. One thing the SEC appears to be looking into is Kimbal Musk’s selling behavior of not using a 10b5-1 plan.

“Kimbal Musk’s second-biggest sale of Tesla shares was in February 2021, when he sold $25 million of stock at around $852 a share—a price the stock wouldn’t reach again until October. The disclosure for that sale also didn’t say Kimbal Musk used a 10b5-1 plan for those trades,” WSJ reported.

At the time of Kimbal Musk’s sale in November 2021, we told our clients that his non-10b5-1 selling behavior was a red flag.

See Kimbal Musk’s three-year stock chart below; those big red circles indicate his non-10b5-1 sales, which have been expertly timed. The selling that’s not highlighted is his non-10b5-1 selling. This is a good example of an insider whose changes in selling behavior have proved smart and it’s why we were viewed his November 2021 as a valuation red flag.

Russia’s invasion of Ukraine is devastating for the Ukrainian people and will likely have far-reaching effects that last for years. U.S. companies are just beginning to understand what it means for them, their workforce, their customers, and for other stakeholders. In a separate post, we examine some early Risk Factor disclosures in newly filed 10-Ks driven by the crisis in Ukraine, using our inFilings software to surface these disclosures.

Looking Ahead: Insiders Will Have Decisions to Make

The first quarter is when a large percentage of companies hand out equity awards and that means vestings of those awards occur in subsequent years on the anniversary of the award. These vestings typically result in increased sell volume during Q1.

Recent events involving Russia’s invasion of Ukraine have completely changed the geopolitical backdrop and have the potential to have wide-ranging world economic effects. Insiders may choose to “ride out” the current quarter, forgoing their normal stock-based liquidity, and reassess where stock prices are when trading windows open in Q2. They may also be adopting new 10b5-1 plans that recognize the reality of current stock prices. Either way, we’ll know more in the coming weeks.