The low level of insider selling in Q1’22 is certainly a positive. Insiders are inherently sellers thanks to stock-based compensation so when they stop generating liquidity it’s a sign that they’re not comfortable with current valuations and prefer to wait out for higher prices.

Think about that for a moment. A special group of market participants who are consistently re-loaded with stock as part of their compensation has changed behavior and not sold stock as they normally would. That “free” and cheap stock means insiders have a lot less risk than other market participants so a significant decrease in selling is a good indicator they think stocks are oversold.

Now, we’ve got to take the bad news. The volume of insider buying in Q1’22 was disappointing considering the market’s drawdown. There was plenty of interesting and valuation-oriented buying on a company-level, but on a macro level we kept waiting for an extreme burst of buying that never materialized. There were high levels of selling throughout 2021 so that certainly played a role in keeping insider buying in Q1’22 down but we still expected more robust buy volume.

So, what does this all mean? It means insiders are willing to wait for valuations to recover before selling again but they’re too cautious to buy en masse right now for any number of reasons (we suggested in last month’s review that this may be how they behave). So, as we wait for Q1’22 earnings season, pay attention to the companies where insiders were buying and pay attention to the companies with robust selling cultures where insiders stopped selling (as identified by our proprietary Cessation of Selling event).

The chart below shows the quarterly seller-to-buyer ratio since 2015. The ratio was much higher (a low ratio is bullish) than in Q4’18 and Q1’20, when the market experienced similar volatility. 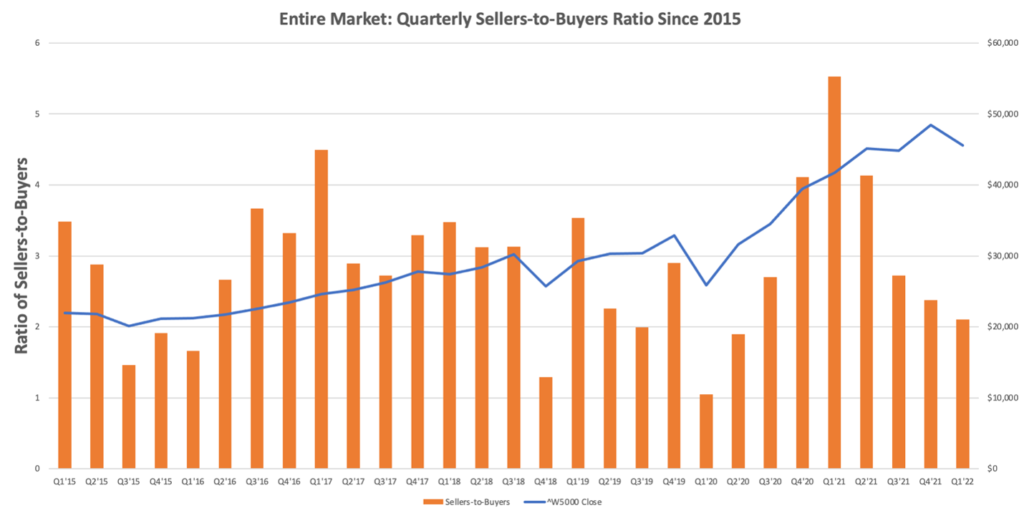 Quarterly seller-to-buyer ratio since 2015. The ratio was higher than in Q4’18 and Q1’20, when the market experienced similar volatility. Source: VerityData

We recently issued our Q4’21 and 2021 Buyback Trend Report and our Q4’21 At-The-Market (ATM) Trend Report. Buyback volume hit a record high in each of Q4’21 and 2021 while ATM volume declined in Q4’21, the fourth-straight quarter that companies have sold less stock using these particular devices.

The big question surrounding buybacks currently is whether companies were opportunistic in Q1’22 and brought the hammer down with even bigger repurchases. They seemed primed to do so but recent data out from BofA’s buyback clients suggests that companies weren’t as excited about buybacks in Q1’22 as they were in prior quarters. We’ll have to wait-and-see as companies typically announce buyback execution information alongside earnings and report buyback execution data in 10-Qs and 10-Ks.

Speaking of buybacks, I recently discussed the Biden Administration’s proposed buyback-related legislation on Bloomberg TV’s Triple Take. I don’t think the Administration’s proposals, including limiting executive selling for up to three years following a buyback, have much of a chance of making it into law. The SEC has regulatory levers it can pull and the agency already has proposals aimed at enhancing transparency surrounding buybacks and cracking down on opportunistic 10b5-1 plan use.

I also recently weighed in on an entirely different subject on TD Ameritrade Network: meme stocks. I’m not a fan, and neither was the other guest who joined me. I talked about some of the insider buying and selling at the names, among other topics.